The mosque is an Islamic Architecture. Jorabangla is a Muslim Mosque. It situated at Barobazar, Kaligonj, Jinaidoh Bangladesh. There is no right information about the name of Jorabangla Mosque, but in conventional term, there was a twin hut. For the cause, this is named Jora Bangla.

On the other hand, in the opinion of somebody, there was a twin lake. Probably in Hijri 800, Alauddin Hossain Shah’s son Shah Sultan Mahmud Ebn Nusai built this mosque. At the time of 1992-03, this place was dug by the archaeologist, then this place was discovered. Beside this place, there is some grave. There is a pond beside north, which is known name of Andhopukor. Maybe, this pond was dug for Muslims to complete their Ozu and drinking water.

Jorabangla Muslim Mosque Architecture is really awesome and it famous Sultanahmet Mosque. This is an Islamic mosque called Muslim temple and the mosque design is unique for this time. 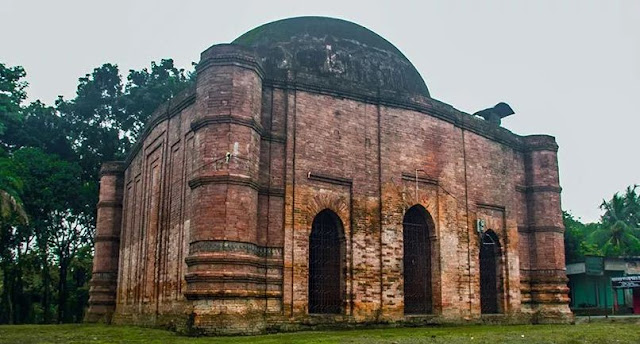 This mosque is situated on 10/11 high platform by small, beautiful, thin bricks.  From its entrance to dighi, the brick brocade has dropped down. There are three Mehrab on the west wall within terracotta design and ornament.  There is the small pillar on both sides.

The central wall was built by brick of flower and leaf art. There are four niches in the wall of each of mosque in the north and south wall. There are three appointed arches on the east side of the mosque.

You can go from Jinaidoh by bus or CNG. On the other site can go by won car or private car.

Where Will Stay At Night In Traveling Time